Now in its 21st year, CMI is an independent academic research program housed within the High Meadows Environmental Institute at Princeton University. Its mission is to lead the way to compelling and sustainable solutions to the carbon and climate problem.

Speaking to over 100 attendees, Stephen Pacala, the Frederick D. Petrie Professor in Ecology and Evolutionary Biology and the director of CMI opened the meeting stating, “There seems to be a recognition happening all at once in different parts of the world, in companies, board rooms, halls of government and the academy, that the transformation of our energy system to net zero emissions of all greenhouse gases is feasible, economic and necessary.” 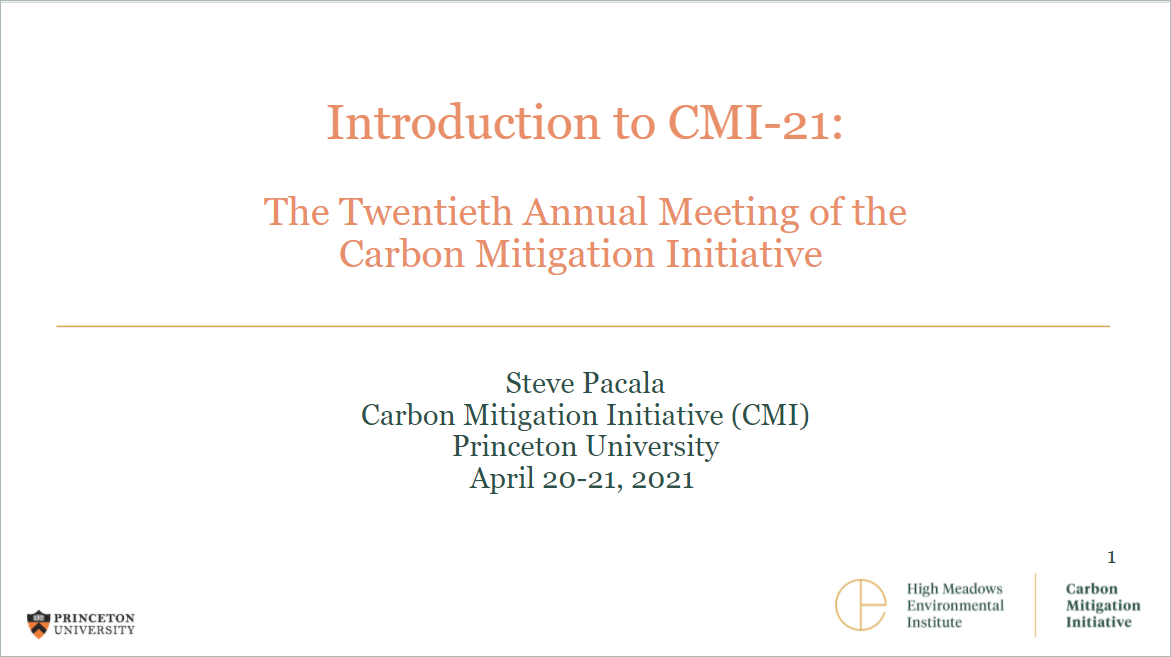 During her welcoming remarks, Kelly Goddard, vice president carbon ambition at bp and CMI’s new bp executive sponsor remarked, “In early 2020, bp announced its ambition to become a net zero company by 2050 or sooner, and to help the world get to net zero. bp is now over one year on from announcing this ambition and we’re pleased that we have made progress against what we have set out. Societal expectations and calls for action continue to increase, reinforcing what we have set out and the need for collaboration to support action.

“We continue to see our long-term collaboration with Princeton on CMI as an important science and technology partnership and we value the research being done by CMI to help the understanding of challenges and opportunities in the energy transition. Over the next two days, we will hear about the relevance of this research to bp and to broader stakeholders including policymakers,” said Goddard.

The meeting’s first deep dive focused on the role of carbon capture utilization and sequestration (CCUS) in net zero energy systems in the U.S., Australia, China, and Europe. The session included speakers from academia, the Biden Administration, non-governmental organizations and bp who discussed what the role of CCUS is likely to be.

In another deep dive, CMI leadership team members and principal investigators, Jonathan Levine and Amilcare Porporato, described a newly launched CMI initiative aimed at determining how land-based climate solutions can be deployed globally to maximize carbon storage on land, while at the same time maintaining global biodiversity and food security.

“If we are going to actually achieve net zero at a global level, country level or even a company level, land based climate solutions must be deployed at massive spatial scales to have impact,” said Levine.

In addition to Levine, professor of ecology and evolutionary biology, and Porporato, the Thomas J. Wu ’94 Professor of Civil and Environmental Engineering and the High Meadows Environmental Institute, representatives from non-profit environmental organizations and bp gave presentations and engaged in a lively discussion.

Another part of the program referred to as “On the Horizon” focused on a variety of research initiatives including: health, employment and cost implications associated with designing a net-zero energy system; methane and wetlands management; the future of atmospheric hydrogen; and global climate changes and their hurricane impacts. Porporato, the moderator, stated, “The purpose of this session is to showcase a sampling of some key CMI scouting activities that help us keep an eye out for new and emerging research areas in science and technology relevant to our net-zero and land-based climate solutions research to determine if there is something we need to look into further. We are excited about this research, because its results are both of fundamental scientific value and relevant to bp’s mission.”

More details on all of these topics and other ongoing CMI research initiatives can be found in the 2020 CMI Annual Report.

This second virtual CMI Annual Meeting afforded the opportunity to gather over 100 participants from around the world including Princeton faculty and researchers, postdoctoral fellows and graduate students, many colleagues from bp, the Geophysical Fluid Dynamics Laboratory, other national and international universities, government, environmental nonprofit organizations and think tanks.