The Robert H. Socolow CMI Best Paper Award for Doctoral Students is presented annually to a CMI affiliated Ph.D. student selected for his or her contributions to an important CMI paper in the past two years. Nominated by CMI PIs and group leaders, papers are judged for their quality and impact on the carbon mitigation community. Specifically, the research is selected based on its contribution to one or more of CMI’s core areas of research: climate science; carbon capture and sequestration; renewable energy; efficient energy use; or carbon policy. The spirit of the program is to recognize and reward CMI-funded work.

One award in the amount of $3,000 will be made annually through the year 2025. Funds may be used for a range of purposes. For example, they may be taken as a taxable award or used for research support. If used for research support, a CMI subaccount will be established to support the awardee’s fieldwork, travel, conference participation, purchase of equipment, and costs associated with data analysis and facilities use. The award is for one year and is nonrenewable.

To be eligible, nominees must:

Call for nominations are held in February of each year and are typically due in early March. All CMI PIs and group leaders are invited to nominate candidates for the CMI Best Paper Award. The nomination package should include the following:

A committee drawn from the PIs and group leaders will conduct a formal review and selection process, with conflicts of interest taken into account. The award will be selected based on the quality and impact of the paper as well as relevance to CMI research and the contributions made to the paper by the candidate.

The CMI Best Paper Award for Doctoral Students is announced at the CMI Annual Meeting. The award recipient will be invited to present his or her work by giving a seminar to the CMI community.

The award was named in 2019 in honor of Robert H. Socolow, emeritus professor of mechanical and aerospace engineering and co-chair of CMI from 2000-2019. 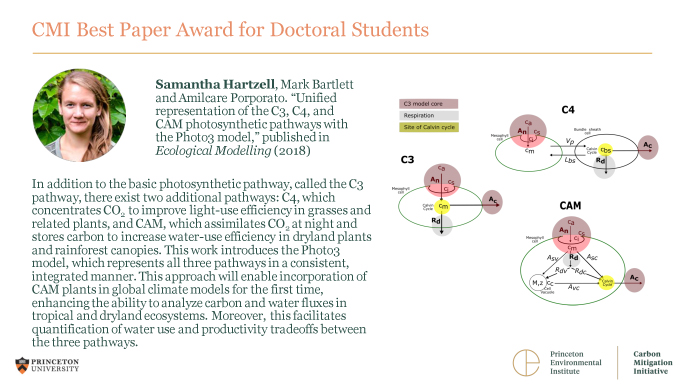